In addition to numerous appearances on Fox, Dr. Cryan has appeared on CBS, ABC and news channel 8. Click on a link below to view some of his television clips. 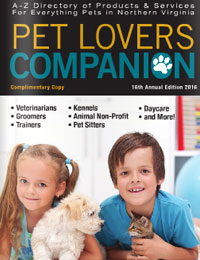 Why Call a Mobile Vet? by Eric M.Cryan D.V.M

The Health Changes OF the Aging Dog by Eric M.Cryan D.V.M 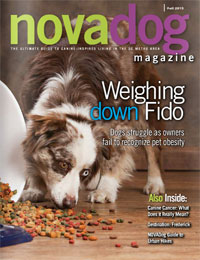 The Vet’s Call in Dogs and Fall by Eric M.Cryan D.V.M 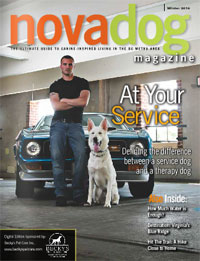 Ask the Vet: How Much Water by Eric M.Cryan D.V.M 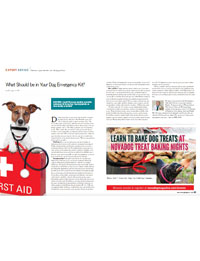 What Should be in your Dog Emergency Kit by Eric M.Cryan D.V.M 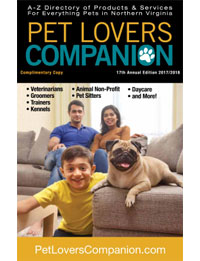 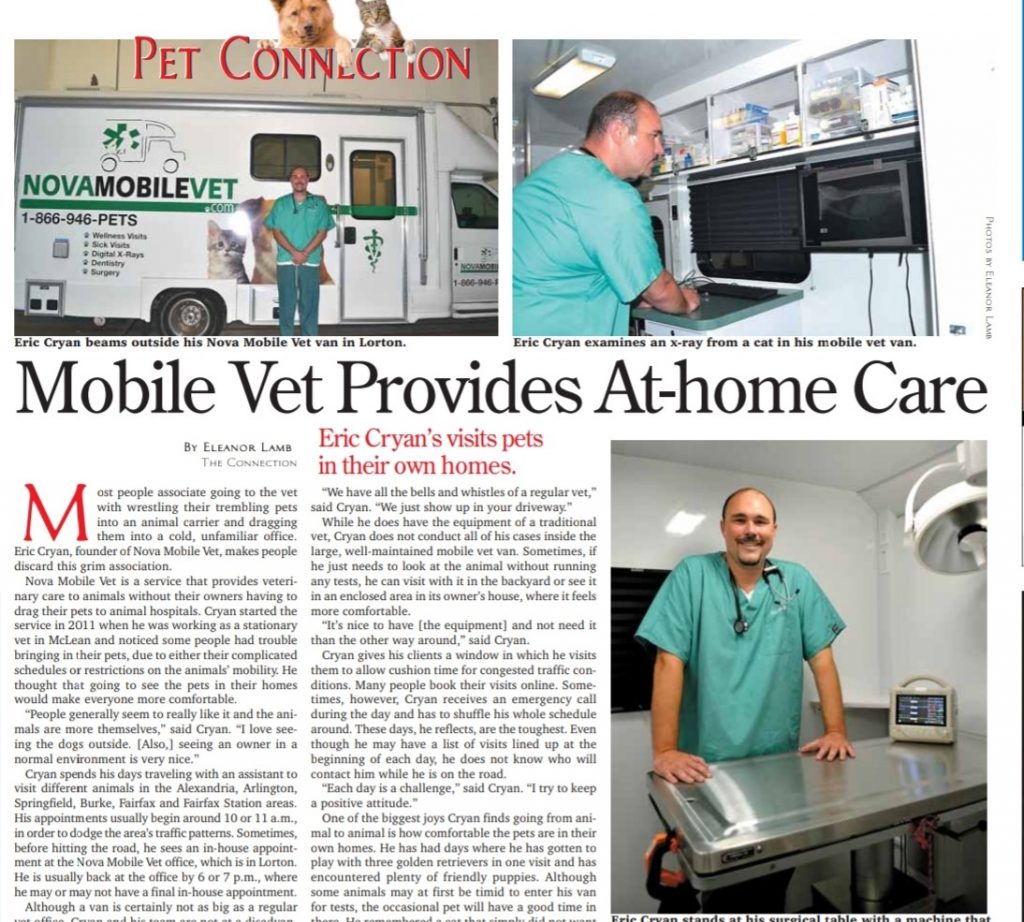 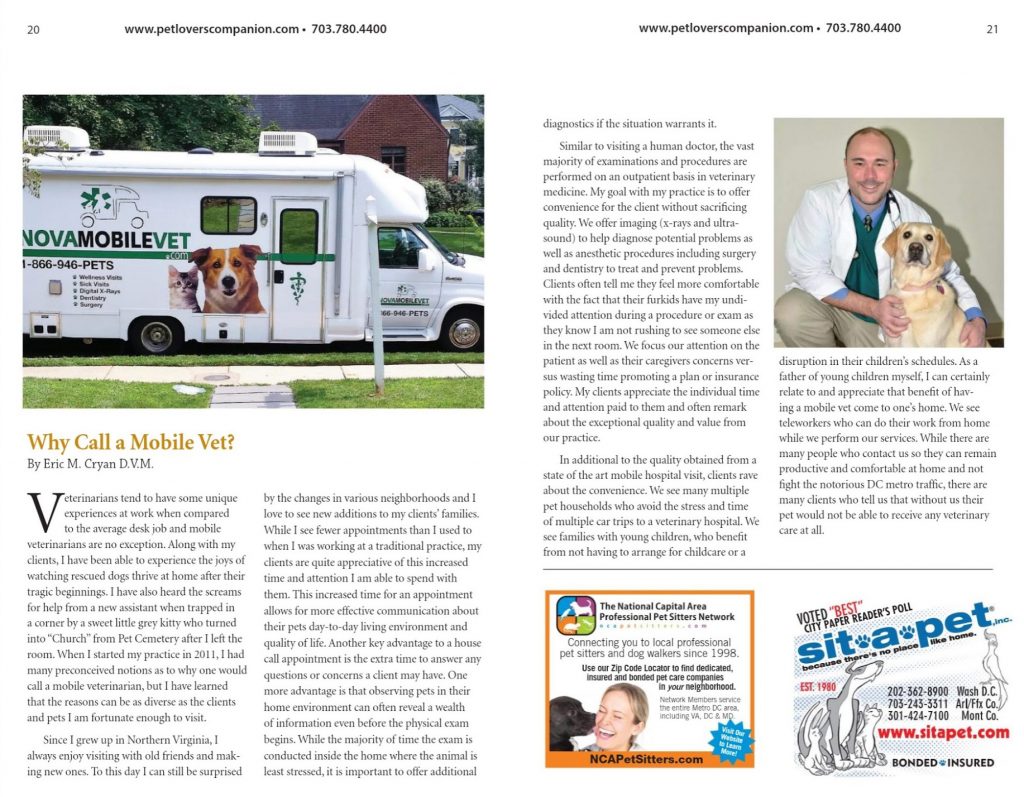 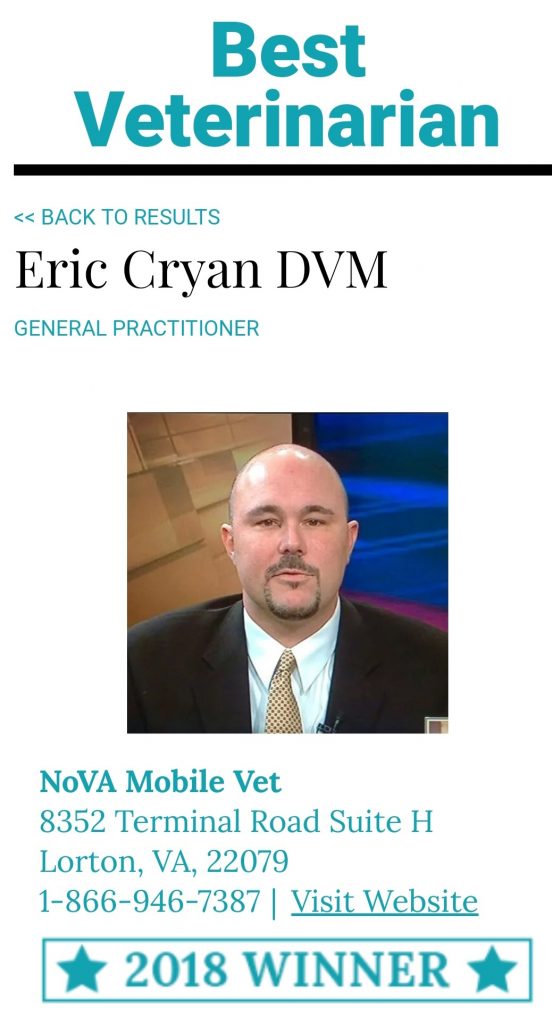 From the NOVADOG Magazine Winter 2017

From the Connection Newspaper-

From The Lorton Patch-

Water is the essential ingredient of life as we know it. Once thought unique to our planet, NASA’s search for it in our solar system has found evidence of past oceans on Mars and potential frozen seas existing on the moons of Saturn and Jupiter today. With this water evidence, scientists now search for evidence of life on other planets because our current understanding of biology is so closely tied to water being the necessary lubricant for life to exist.

We know how essential water is for ourselves and our furry companions, especially during the hot muggy summers in Northern Virginia when we are warned continuously to “drink plenty of fluids” while suffering through yet another heat wave. During these colder months of the year, however, an owner is more likely to notice a change in filling up the water bowl and bring it to my attention. Drinking too much water, or polydipsia, could be an indication of a serious medical condition. On the contrary, not drinking enough water causes dehydration and can lead to muscle cramping and eventual organ failure. So how much is too much water and what amount should your dog be drinking to remain adequately hydrated?

Upon arriving at an appointment one of the first questions I ask is, “Has there been any change in eating or drinking?” Many times an owner is unaware of how much a dog is drinking until it becomes excessive and they need to refill the water bowl frequently. At veterinary school, we were taught that a dog should drink between 4466 ml/per kg of body weight. As an American, I cannot relate to the metric system, but I am fairly familiar with how much 12 ounces of cold liquid is especially after a long work week. An easy rule of thumb, it is roughly one ounce of liquid per pound of body weight. Thus, the 12 pound Bichon would need roughly 12 ounces a day, the 24 pound terrier would need two 12 ounce servings, the 48 pound field spaniel would need four 12 ounce servings or 48 ounces daily, you get the picture. After giving clients an easy way to measure how many 12 ounce bottles of water a dog consumes daily, they can report back to me if it is too much or too little. If a dog is found to be drinking excessively or not enough, generally the next step is to perform some testing to determine the cause.

If a dog is not drinking an adequate amount of water they can become dehydrated and quickly deteriorate in health. For some dogs, the cause could be as simple as stress in an unfamiliar environment or situation, or anxiety after a move. Encouraging a dog to drink by adding water to food is a way to augment the water that is naturally obtained from the digestion of food. For some dogs, the decrease in water consumption is not behavioral but medical in origin. Significant dental disease can cause dogs to avoid water as can foreign bodies or trauma to the oral cavity. If no obvious psychological or mechanical cause in the oral cavity is identified, often dogs drink less water because they are feeling poorly in general. Fever from infections, organ failure, cancer, and of course obstructions from eating nonfood objects can all halt normal drinking patterns. Awareness of the general volume of water consumed can often be the first clue in detecting a potential critical problem in your dog’s health.

Drinking too much water can be due to numerous causes as well including kidney disease, diabetes (mellitus and insipidus), Cushing’s disease (hyperadrenocorticism), infections, psychological (psychogenic polydipsia) and more. Generally the doctor will start with routine bloodwork and a urine sample, something I recommend at least yearly for all dogs seven and older. These tests yield vital information about a dog’s metabolic status and a picture of their organ health and electrolyte balance. Using this information a veterinarian can intelligently recommend a course of action and discuss further diagnostic and treatment options available to you and your canine.

Water is an essential element of life so monitoring the consumption of water is an important barometer of your dog’s overall health. Identifying when your furkid is not feeling well by drinking less water might mean the difference between quick intervention and preventing your pooch from spiraling downward into dehydration and requiring hospitalization with intravenous fluids to recover from a deepening illness. Conversely, identify too much water consumption in a condition such as diabetes mellitus might prevent a life threatening crisis called diabetic ketoacidosis. Using a simple measuring device found in the recycle bin can provide an important at home diagnostic tool to check your dog’s health. ND 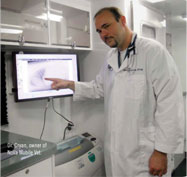 As we drove down Burke Centre Parkway in our mobile hospital, affectionately called the vetmobile by our staff, the familiar neighborhoods grew up in greeted me with each passing turn. We were heading to our next appointment to examine a 10-year-old chocolate Lab named Milo. Milo was due for his an-nual checkup and rabies vaccine, and his owner also mentioned he was moving a bit slower than usual.

My technician and I pulled in the driveway and were greeted by a stiff moving but very energetic Milo, who wagged his tail vigorously as we approached. We examined Milo in the comfort of his home and then addressed the questions and concerns of Milo’s owner while discussing the physical examination findings. Milo, heart and lungs sounded completely normal and healthy, which was great news for a large, 10-year-old dog. I explained, however, that Milo did have evidence of moderate dental disease. In addition, Milo’s hind legs had decreased range of motion, and there was evidence of some muscle atrophy. Finally, Milo, eyes had begun to look cloudy, a common change called lentictdar sclerosis, which does not neces¬sarily result in the same negative prognosis as cataracts.

Have a veterinarian examin any new lumps or bumps as they develop, especially if they grow quickly or change in size or consistency.

“Overall, Milo is looking good, but he is starting to show some changes consistent with his age; I began. “What do you mean his age” the owner guts-tioned,”Milo is not old, is he? I had a Mini-Poodle that lived to 19!”. I explained to the owner that Milo, being a Lab mix, tends to age a little quicker than smaller dogs. Take for instance his eyes. You can tell a human, eyes are start-ing to deteriorate when one must hold books further away to read. In Milo, case, like many dogs older than age seven, his eyes are getting a little cloudy, which can decrease his visual acuity. “You mean he has cataracts,” “No, I can still see through his lens, I explained. “It is just somewhat cloudy as the proteins in the lens break down over time. Humans with a similar condition describe it as like looking into a frosted pane of glass.. addition to his eye condition, Milo, teeth have moderate dental disease, and his hips may be bothering him as a result of arthritis: “Y., now that you mention it, he does have more trouble getting in the car and going up the stairs. That’s why I called you guys. He hates the car ride now; the owner commented. That comment does not surprise me; a lot of my clients’ bigger dogs can become” front wheel drive” dogs if their hips or knees are bother-ing them as they age. They pull themselves around with their front legs because their back legs are bothering them. This, unfortunately, can lead to muscle wasting from lack of use in the hind legs, and soreneu in the front from overuse.

“Makes unse doc, I never really considered Mao old, but he was born in 2002. What else do you recommend for him”.

I offered Milo’s dad the option of taking him out to my mobile hospital for a digital x-ray to get an immedi-ate look at his hips, but, in relatively mild cases like this, I will typically treat the condition with some simple and inexpensive medications to see if that can improve the situation. Together, the client and I decided to try these first. I then proceeded to discuss our senior wellness chcck and our recommendations for dogs as they age, which includes the following:

Milo’s dad thanked me for explaining our concerns, and we elected to check his labwork, which came back well within normal limits. A few weeks later, we cleaned Milo’s teeth and started him on some medications to help with his arthritis. Then we got the call we love to hear,”Doc, you would not believe how active Milo is. He is running around like he did years ago!”.

I thanked him for the call and told him to keep us apprised of how Milo was doing as we headed to our next .11 in Fairfax. ND

Eric Cryan, D.V.M., is the chief veterinarian at NoVa Mobile Vet, the new state-of-the-art mobile practice he started last year. He grew up in Burke and received his veterinarian degree from the VMRCVM at Virginia Tech. Dr. Cryan currently lives in Springfield with his wife, Alicia, the, two children, two cats, and a dog named Bliss. If you have any questions or concerns, you can reach Dr. Cryan at drcryan@ novamobilevet.com or call 1.866.946.PETS (7387).

We will do our best to accommodate your busy schedule. Request an appointment today!

Font Resize
Contrast
Accessibility by WAH
Call Us Email Us